I think we can all agree that the right food processor not only saves time and money but helps encourage a healthier diet as well. However, finding the right one can be extremely technical and time-consuming. To help narrow down your options, we’ve reviewed the efficiency, quality, and performance of the Veggie Bullet in detail.

After Nutribullet’s incredible success with the Bullet Blender series, the brand entered the food preparation market with the Veggie Bullet. This appliance was specially designed to slice, spiralize, chop, and shred vegetables. Boasting a 500-watt motor and several different blades, it has some excellent uses and features. However, there are some issues you need to be aware of as well. Let’s take a look! 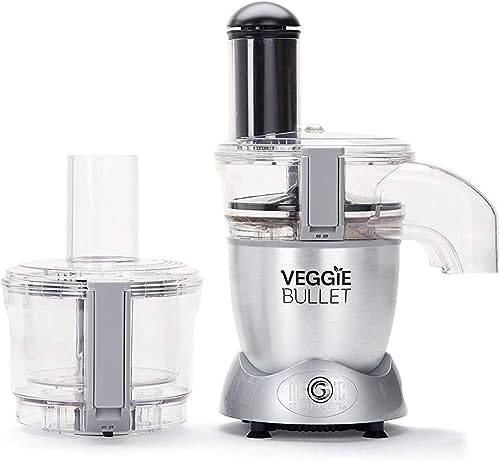 So, what makes the Veggie Bullet different? The most interesting thing about this appliance is that it’s intended for chopping, processing, and slicing cheeses and vegetables for meal prepping purposes. Let’s take a look at its features: 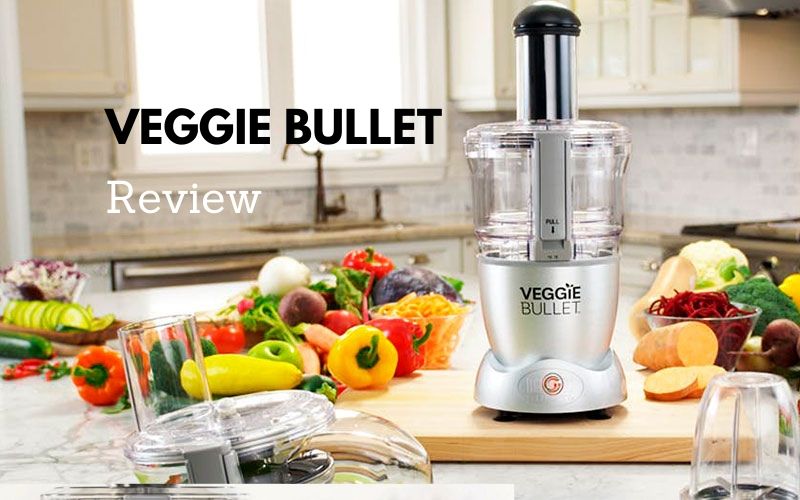 An incredibly unique feature, the spiralizer is what makes the Veggie Bullet different from other food processors. The feature works perfectly with certain types of softer vegetables, such as cucumber and zucchini. It works well with other harder vegetables as well, like carrots, sweet potatoes, and beets.

However, the results vary with the type of vegetables you’re using and the way you’re preparing them. The model comes with four different spiralizer blade options. These include a curly fry blade, a tornado spiral blade, an angel hair blade, and a ribbon blade. All these options enable users to make incredible spiralized ingredients for their recipes.

But there’s a catch. Some users might find it difficult to spiralize harder vegetables, depending on the way they’re being prepared. All in all, when it comes to the performance of the spiralizer, the Veggie Bullet doesn’t disappoint.

This appliance also comes with a shredder blade. This is basically a disc that flips over to slice on one side and shred on the other.

The blade is specifically designed to shred relatively hard vegetables and food ingredients, such as cheese, meat, carrots, and beets. Just make sure that you cut or chop any larger ingredients, so they don’t get stuck in the chute.

It also does an excellent job of slicing harder vegetables and fruits. But the best part? It creates perfect slices and takes very little time to do so. It’s further able to process a large number of ingredients at one time.

However, every coin has two sides. It’s possible that the blade might fail to slice larger food pieces. So, make sure that the ingredient or vegetable has been cut into smaller pieces before chucking them into the processor.

Overall, the auto-slicer feature of the Veggie Bullet works perfectly. You might even feel that it delivers better performance than the shredder!

Do You Need The Veggie Bullet?

Featuring a slicer, shredder, and spiralizer, the Veggie Bullet is perfect for a specific type of user. If you’re someone who likes to shred cheese, make their own vegetable noodles and vegetable salads, or grind nuts and other vegetables and fruits, then this appliance will certainly reduce your prep time in the kitchen. 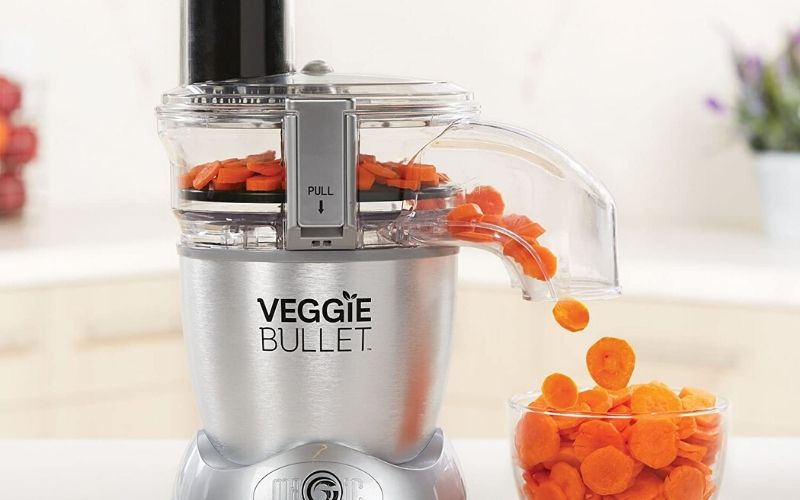 It’s also suitable for users who spiralize regularly and are looking for a faster and better alternative to doing the work manually. Since all three of its functions work perfectly, the Veggie Bullet is ideal for those who use plenty of soft vegetables or fruits to prepare their meal as well.

The Veggie Bullet is extremely easy to operate and does not require any technical skills. Anyone can comfortably and easily use it to process ingredients. But the fact that it offers all three functions in one is what makes it different from other models. So, even if you don’t own a food processor, the slicer/shredder blades can offer you the help you need.

But that’s not all the product has to offer! The Veggie Bullet comes with two different bowls. One is designed for spiralizing, while the other is for grating and slicing. So, make sure you select the right one before each process!

The Veggie Bullet turns vegetables into noodles more efficiently and quickly than most models available on the market today. But that’s not all! It creates long and even broccoli noodles, sweet potato noodles, zucchini noodles, and beet noodles with virtually no waste.

Since this appliance is extremely user-friendly and simple to use, it can help increase your vegetable intake. It can further help you make specific diet plans and achieve weight goals.

The Veggie Bullet is extremely popular among positive reviewers and satisfied customers because of its spiralizing feature. Users found it extremely easy to spiralize zucchinis, carrots, and other vegetables and stated that it produced excellent results. 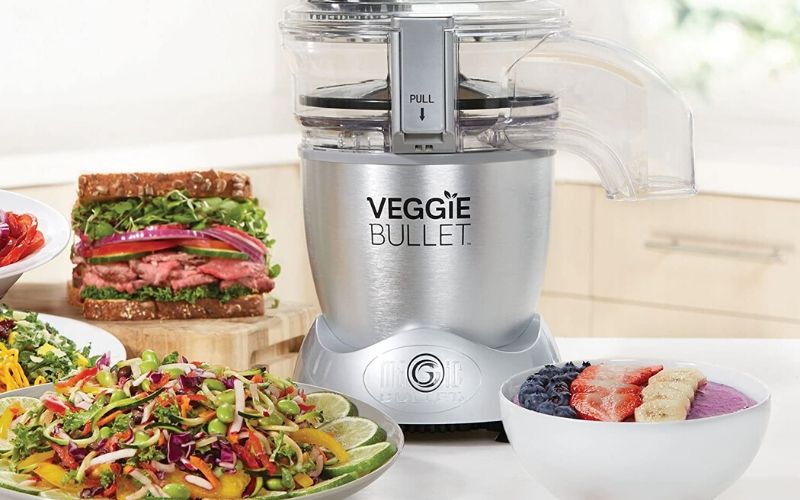 The Veggie Bullet has a lot of parts, making assembly cumbersome and time-consuming. The appliance is also a bit clunky and large, so storage can be a bit of a nuisance.

Since the unit has several different parts, cleaning it can get complicated and messy. Although the bowl and lid are dishwasher safe, shredded cheese and other foods can get stuck inside the hook of the sprout, making it difficult to clean.

How To Use The Veggie Bullet

As mentioned above, using the Veggie Bullet is incredibly easy. Here are some simple steps to follow: 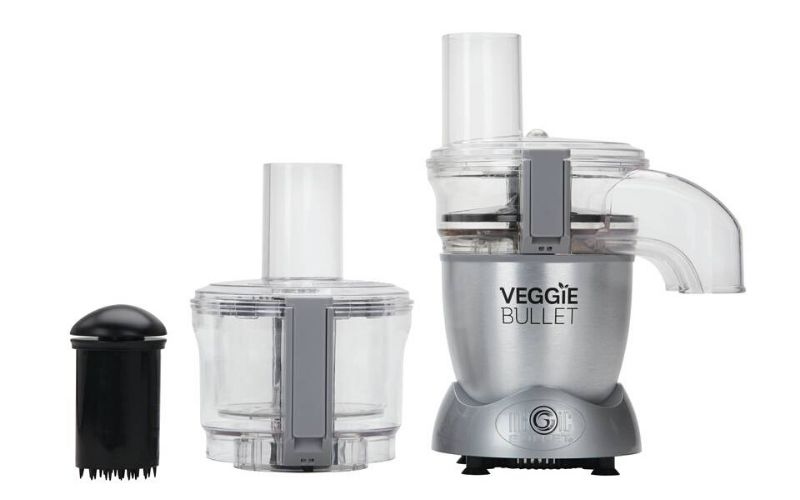 How To Clean The Veggie Bullet?

Although the Veggie Bullet can create long, even vegetable noodles, it’s not so great when it comes to cleaning up. Even if you’ve completed a short prep session, there are still a lot of parts to wash. Since you’re going to have to clean lids, blades, bowls, and chutes, the entire process is a bit cumbersome.

However, this is a common problem in most processors and is not specifically a Veggie Bullet fault. All parts of the device are dishwasher safe, as long as they’re placed in the top rack. It’s also advisable to gently scrub and rinse each part and blade after use, to ensure nothing sticks or dries.

How Does It Compare To Other Models?

But what’s the real story? The Magic Bullet can blend, whip, chop, and grind, but it cannot spiralize. It can, however, be used to make smoothies and shakes, which can then be taken on the go using the bullet cups and flip-top lids. You can’t do this with the Veggie Bullet.

In the end, the choice comes down to slicing and spiralizing. If you’re dead-set on having a spiralizer, then the Veggie Bullet is the way to go. However, if you’re looking for something small and compact that can chop salsa, blend guac, and grind coffee, then the Magic Bullet is the one for you!

Veggie Bullet Vs. Vitamix A2300 Ascent

Designed with a pulse button, a large pitcher, and a base with 10 speeds, the Vitamix A2300 Ascent is a simple blender. While it doesn’t include a spiralizing feature, it can still chop vegetables.

In conclusion, both appliances are very different. If you have a big budget and need a new blender, then a Vitamix is the perfect choice. If you don’t, then it’s advisable to settle for a chopping board and knife for your vegetable chopping needs.

The Veggie Bullet is all about its three-in-one spiralizer feature. So, if you’re looking for this function in a food processor, then this appliance is certainly the one for you!

The Veggie Bullet is fast, efficient, and easy to use. It can create ribbons and spirals for zucchini noodles, curly fries, vegetable salads, and apple tarts, amongst others.

In our opinion, purchasing the Veggie Bullet is better than going for a single appliance for a specific task. Its three-in-one feature allows you to easily interchange the functions with the included attachments. It further saves you time and is one of the most convenient kitchen appliances for all your food processing needs.

Although it seems like an expensive piece of equipment, the Veggie Bullet will certainly save you money in the long run. Moreover, the user experience and efficiency it offers are undoubtedly worth it!